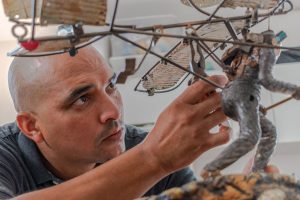 January 1983, Yonier Powery Serrano is born, beginning his life’s journey on the Isle of Youth. His mother worked in the ceramic factory where he spent much of his time playing with discarded portions of clay, soon shaping them into creative pieces of his own. Those muddy days at the factory represented the beginning of his passion for sculpture, his love of artistic expression. Throughout his early years, this driving motivation towards creation pushed him to sculpt pieces of wood, using tools from the carpenter next door or to gather scrap metal into his latest work of art.

His fascination for the arts was evident throughout his childhood.  Yonier showed great interest for the visual arts while participating in school arts contests and always achieved outstanding results.  He found a passion for the circus arts and spent more than three years at the Elementary School of Arts in the specialty of dance.

In 1999, after several attempts to fulfill his dream of becoming a professional dancer, Yonier returned to his other passion and began focusing once again on Visual Arts. This period was among the most defining and important ones in Powery’s life.  He joined the workshop (Ksa) owned by the prestigious artist Agustin Villafaña. “I told Mr. Agustin of my intentions to become an artist. He observed carefully every single of one my expressions and after a while, he started to explain in detail his techniques, the sacrifices and expected commitment to the arts. At the end, he inquired: ‘Are you serious? Do you really want to be an artist?’  ‘Yes!’ I replied quite convincingly. Then the maestro went outside and came back with a bucket full of garbage, dropped all of its content over a desk and assigned me to draw it all with a pencil. It took me almost a month to accomplish that goal. The first week I wanted to give up. By the second week I felt it was a waste of time, Mr. Villafaña must be fooling me, being an artist has nothing to do with drawing banana’s skins and spoiled food on a piece of paper. I wanted to do great paintings. I wanted to be famous! But I completed the assignment anyway. From the time I arrived, I was tired, confused and frustrated but finally the piece was finished and handed it to the man who would become my first and most influential mentor, Mr. Agustin. When he saw my artwork, he smiled and without hesitation stated ‘Welcome to the world of Arts’.  Now, I understand, now I see his message, ‘No matter how hard the road might be, one must cling to the dream and do not let go. There is art in every sense of the universe.’”

After a year with Agustin Villafaña, Yonier started his formation at Wilfredo Lam’s Professional Academy of Visual Arts back in the Isle of Youth.  There he learned to master, through various art creations, a wide range of techniques.  Drawing, painting, ceramic and sculpture, he was eager to experience all types of mediums. He created side by side with his peers, top quality of artists, who not only inspired him but challenged him to expand his work and his creativity.  The expectations were high, with the intent of leading students toward professional competition.  Yonier excelled amongst this talented group of peers, graduating in 2003 with honors.  One of the best in his class he was awarded membership to the Hermanos Saiz Association, the organization that gathers the vanguard of the young artists in Cuba.

After graduation Yonier was called to join the Obligatory Military Service, mandatory for every male in Cuba. After 18 months of a 24 month post, he was awarded with early release taking into account his outstanding behavior and could begin once again pursuing his creative endeavors. 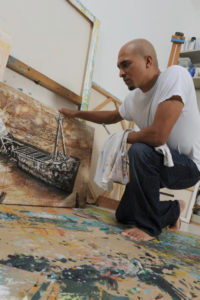 In 2006, he decided to contribute to the training of the new generation of artists on the Isle of Pines serving as a teacher. It was his opportunity to give back part of his knowledge to aspiring artists and to encourage them to commit to the same level of excellence in their artistic lives that he had been shown.  But teaching did not stop Yonier from keeping his endeavors as an artist, he continued to participate in several national and international events and competitions held in Cuba, displaying his art among the greatest artists of Cuba and the world.

Yonier’s time as a teacher was unfortunately short lived and by the end of 2007, due to financial reasons, he accepted a position as interior decorator / artist in Sol Melia Hotel, in Cayo Largo del Sur.   For two years Yonier created murals throughout the hotel, learning different techniques, growing his creative experience and discovering emotions which would always accompany him on his career as artist.  Then in 2009 he visited the Cayman Islands and as destiny would have it, settled in Grand Cayman in 2010 where he has kept his art alive working diligently to produce pieces that are not only visually fascinating but meaningful.

As Mr. Powery’s collection grew, his refined technique and outstanding talent was well received by the art community in the Cayman Islands.  His work received early acclaim, and was included in several gallery exhibitions, as well as some private collections in the Cayman Islands and worldwide.  He also has a permanent display at the National Gallery Art Museum in Grand Cayman.

More recently Mr. Powery Serrano has held many exhibitions, displaying his most current pieces, and continues to be invited to present his work in diverse collective art displays.  Yonier’s passion does not stop there; he also uses his talent and overwhelming humanism to support a wide range of charity events and organizations, often donating paintings and other art pieces to raise funds for worthy causes.

Despite this exposure, the struggle to showcase his work and grow his brand on this small island continues.  Yonier stays true to his art and ensures his work is not tainted by the commercial character of much of the artistic work throughout the islands.  He follows his passion and embraces the creative nature of all that is around him.  He has planted and fertilized trees of strength in the soil of sacrifice to harvest the emerging glory ahead in his path.

A Critical Approach To The Work Of The Artist 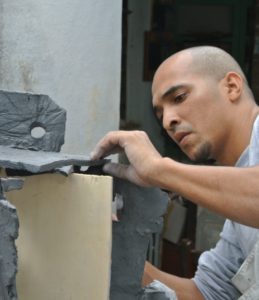 When art goes beyond the limits of the pure technique to establish a deep conceptual speech, the act of creation achieves unexpected dimensions; this is the attribute that characterizes the work of the artist Yonier Powery Serrano (Isle of Pine, Cuba, 1983).

He started his formation at Wilfredo Lam’s Professional Academy of Visual Arts in the island where he was born.  Since the very beginning, it was easy to notice his interest on existential matters which is not that common to find in young artists beginning this fascinating adventure.  The tutoring of Visual Artist Agustin Villafana played a relevant role in the way to become the artist he is now-a-day.

Yonier has mastered through the exercise of art creation a wide range of techniques.  Among them, is the drawing, painting, ceramic and sculpture (in this last aspect using the ‘Readymade’ resource).  He had also used to create associations between the physical and spiritual wear and tear of human beings which occur through the daily struggle for survival.  The only condition for this artist is the fact each piece of art has to hold a philosophic message related with the complicated circumstances we have had to live.

Owning a noticeable mastery, the artist has been able to explore with the same accuracy, the human body, the portrait, the art of the object and the landscape as well.  His poetry when painting sometimes reaches the violent line of expressionism, at other times he seems to play with stains, lines at random, and chiaroscuro.  He has had some luck even when trying with abstract figures.

As a matter of destiny, the artist settled down in Grand Cayman in 2010, where he has kept his art alive.  Having very close connection to Cayman Islands due to his Caymanian ancestries and through marriage (in which a family is being formed).  While being surrounded by the sea, peacefully and calmed or rough and tempestuous at times, it had constituted motivation for this artist to develop a fine affinity toward the marine fauna.  Through the use of the man-animal metamorphosis the painter conceives a surrealistic world, full of hallucinating and amazing images, bringing about a new poetic language.

Mr. Powery Serrano has attended and participated in several national and international Art Exhibitions, Visual Arts Salons and other events, being awarded with prizes, distinctions, and honored widely due to his talent and quality as an artist and as a human being.

Let’s hope this review helps to you to discover or re-discover a young and talented Cuban artist for whom creating is an act of faith, a necessity of his existence that cannot be postponed as it is the most authentic way to share the beauty.